Why airway beacons, on a site dedicated to survey marks?

Apart from their obvious connection as objects that helped to build the current American infrastructure, airway beacons and survey marks are connected in another, more obscure way: through the National Geodetic Survey database.

In 2003 a fellow geocacher/survey mark hunter, Roger Barnes, asked if I would host a survey mark-related list on my web server space. He explained that he had pulled out all of the entries classified as airway beacons from the NGS database.

I was happy to post the lists and over the years I’ve maintained the content, most recently adding a map of beacon locations and accepting new and updated beacon information.

The airway beacons’ primary purpose was to provide a nighttime navigation system for early aviators, particularly for the U. S. Air Mail service, beginning in the 1920s. It’s true that the U.S. Coast & Geodetic Survey (precursor to NGS) was involved in early airway mapping. But the list of beacons drawn from the NGS database is not complete, and the beacons in the database are included primarily because they served as landmark stations. Still, to my knowledge it is the most extensive “catalog” of beacon locations, data that otherwise might have been lost to time and definitely would have been very difficult to piece together from other sources.

Roger’s lists have generated a lot of discussion among aviation enthusiasts and people who enjoy hunting the beacon towers and associated concrete arrows just like I enjoy searching for survey marks. I’m no expert on the topic but I have gathered some resources over the years, and I know several people who are extremely knowledgeable on the topic. Please contact me if you have questions or something to contribute! 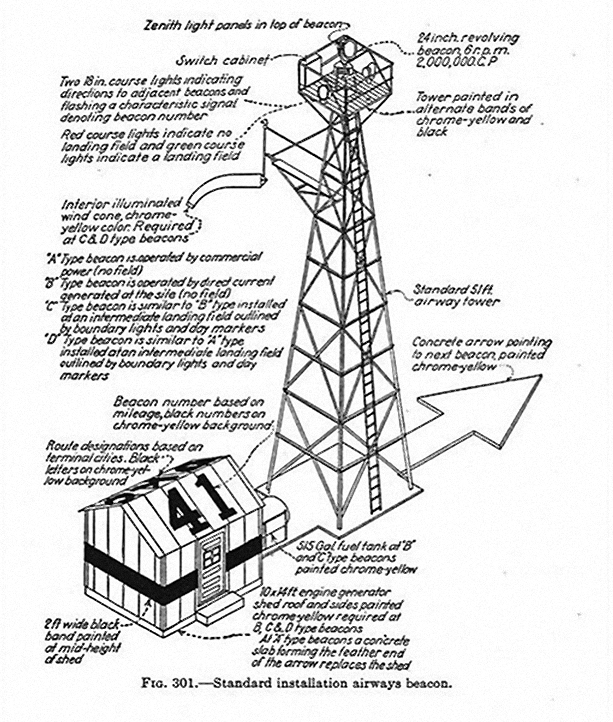 The original standard airway beacon is a 24-inch rotating unit of the searchlight type with approximately 1,000,000 candlepower. The new standard airway beacon is a 36-inch rotating unit showing two beams of light separated by an angle of 180, each beam having a maximum of about 1,250,000 candlepower. The airway beacons are so operated as to show six clear flashes per minute. A directional arrow seventy feet in length, which points to the next higher numbered beacon light, is constructed on the ground at the base of the beacon tower. On the feather end of the arrow, or on one side of the roof of the small power house, the beacon-light site number is painted. Beacons are numbered from west to east or south to north, between terminal cities, the numbers corresponding in each case to the nearest ten-mile interval.

In the case of beacon installations where rotating beacons showing only clear flashes (rotating beacons without color screen) are in use, course lights are generally installed to provide the auxiliary color flashes, the presence of landing facilities being indicated by green flashes and the absence of such facilities by red flashes. Two course lights are mounted on each beacon tower, one pointing forward and the other pointing backward along the airway. These course lights are searchlight projectors fitted with aviation red or green lenses and giving a beam of fifteen degrees horizontal and six degrees vertical spread and of about 100,000 candlepower. Each course light flashes its code signal, which corresponds to the number of the beacon on the airway. The course lights flash code numbers running from one to ten, and thus indicate successive 100-mile sections of the airway. In order for a pilot to identify positively the number of a beacon site or the miles he has flown along the airway from the code characteristic, it is necessary for him to know on which 100-mile section he is flying.