Again thanks to Jeff Jalbrzikowski of NGS, we have scanned USGS datasheets (15′ topo quads)—this time for Pennsylvania!

Again thanks to Jeff Jalbrzikowski of NGS, we have the scanned USGS datasheets (15′ topo quads) for West Virginia.

Jeff Jalbrzikowski of NGS was kind enough to send me the full run of scanned USGS datasheets (15′ topo quads) for Kentucky, Maryland, West Virginia, Ohio, Pennsylvania, and New York. It was such a treat!

I have a few of the states nearly ready to go, and Maryland is complete.

Thank you so much, Jeff, for reaching out and providing me with this fascinating historical data!

David Izatt has submitted the following photos of an arrow at the site of SAN FRANCISCO—SALT LAKE AIRWAY BEACON 59 (the beacon is now destroyed).

Dave writes: “This arrow has also been recently painted with orange paint. I do not know the story behind this. The arrow is on the south side of the Great Salt Lake. It can be accessed from the dugway exit on Interstate 80. The road is gravel and dirt. Most vehicles should have no problem. Coordinates are: 40.7500160°,-112.6482090°.”

As always, thanks for your contribution!

Thanks to Harry Nelson of MaineDOT for reminding me of this funny video when I asked about tracing an old deed!

Dave Izatt has submitted the following photos of LP0496 – SAN FRANCIS SALT LK AWY BN 57. The tower is gone, but the arrow is intact. Dave says that a 4-wheel drive vehicle with high clearance is required to drive directly to the arrow.

The beacon tower’s description is difficult to find now, because it has been marked as Destroyed in the NGS database. Below is the original Coast & Geodetic Survey description written upon their observation of the site in 1940. Strangely, they claim “There is no concrete arrow to indicate the course.” Is this a mistake in the description? I can’t imagine the arrow having been added after 1940. Also of interest is that (according to Wikipedia) Low is a ghost town, abandoned in 1955 due to lack of local water.

ON A LOW RANGE OF HILLS E OF THE GREAT SALT LAKE DESERT. 28.5 MILES NW OF GRANTSVILLE, UTAH, AND 5 MILES NE OF LOW, UTAH. LOW IS PAINTED IN LARGE WHITE LETTERS ON THE SIDE OF THE HILL. AND ABOUT 0.8 MILE N OF U.S. HIGHWAY 40, ON TOP OF A SMALL HILL.

THE BEACON IS A STANDARD RED AND WHITE-STRIPED, ROTATING, AIRWAY BEACON, ABOUT 60 FEET HIGH. THERE IS A SUPPLY AND CONTROL HOUSE AND A LARGE RESIDENCE ON THE SIDE HILL, ABOUT 400 YARDS FROM AND 200 FEET BELOW THE BEACON. THERE IS NO CONCRETE ARROW TO INDICATE THE COURSE.

Thanks, Dave, for your contribution!

Fellow survey mark hunters, please consider helping NGS with this year’s GPS on Bench Marks initiative. Data submitted by August 31, 2018 will help in the development of the new geoid, GEOID18!

All observations are welcome. If you don’t have professional surveying equipment, no problem—please submit your observations, including field notes and photographs, to assist those who have pro equipment in finding the mark!

And don’t forget, even with consumer-grade GPS equipment such as a handheld unit or phone, you can always update the coordinates for marks with SCALED positions.

Lately I’ve been playing with Leaflet and GeoJSON files. I thought someone out there might want the airway beacon files in GeoJSON format, so here they are!

Website contributor Dave DuPree has found the following image and article in The Salt Lake Tribune from Saturday, November 26, 1932 (page 33). This is the article to which Dave referred in his comment on the Needle Peak video. Thanks, Dave! 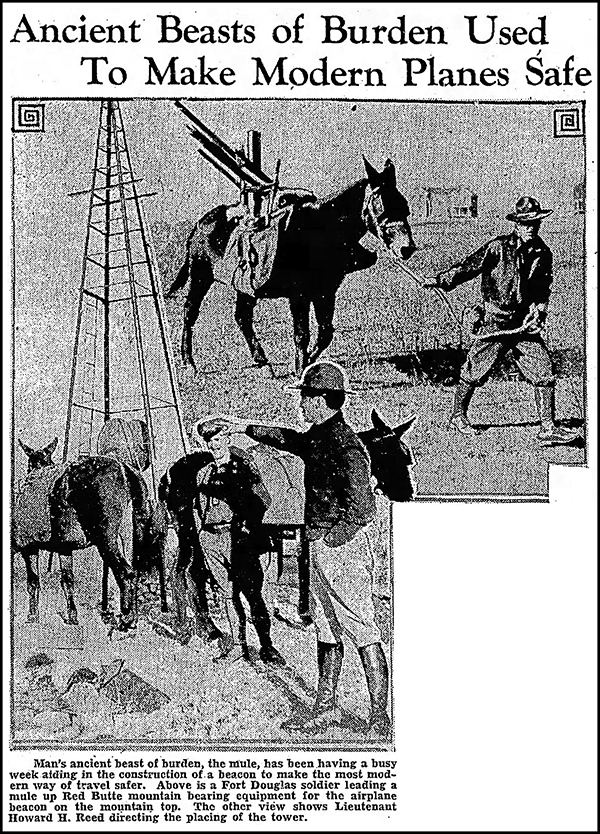 Man’s ancient beast of burden, the mule, has been having a busy week aiding in the construction of a beacon to make the most modern way of travel safer. Above is a Fort Douglas soldier leading a mule up Red Butte mountain bearing equipment for the airplane beacon on the mountain top. The other view shows Lieutenant Howard H. Reed directing the placing of the tower.

Primitive methods of transportation have been used during the past week to make safer the most modern means of travel. The lowly mule, used as a beast of burden since earliest times, has been kept busy so that the path of airplanes traveling across the continent may be made easier.

With the adoption of the recent policy of the airways division of the United States department of commerce to replace beacon lights with equipment of more efficiency, Red Butte mountain for the past few days has been the scene of much mule travel. The animals loaned the division by the commanding officer at Fort Douglas have been employed to carry the new beacon to the mountain top, where it will replace the present one as a guide to pilots coming into Salt Lake valley from the east.

W. E. Kline, in charge of the airways division office, has had charge of the work, which is expected to be completed Saturday or Monday. According to Mr. Kline, the new 36-inch beacon light will have a beam of 1,500,000 candlepower, or from 300,000 to 400,000 greater candlepower than the light now in use. He said the present construction is part of a plan to replace more important beacons with equipment of greater efficiency.